Rail Route's level editor allows the community to build their own masterpieces. Or trash, depending on how you see the level.

Building tracks is practically identical to how to build in freeplay. However, there are some major differences:

If you want to know the basics on how to build, check out Building.

Stations are important enough that they must be done in their own editor tab. In said tab, you can add more tracks to the station, remove unnecessary tracks, name the station and place signs, and choose if the station is a border or not.

Creating a new station is as simple as clicking on the "new station" button. Placing it, however, takes some work. Each track must be individually placed, and can be placed anywhere on the map. This can lead to some innovative station designs and clever mapmaking, but also allows players to just place two tracks on opposite ends of the map. It is thoroughly recommended that you put your station platforms together in such a way that they are recognizably part of the same station, as it is just good level design. 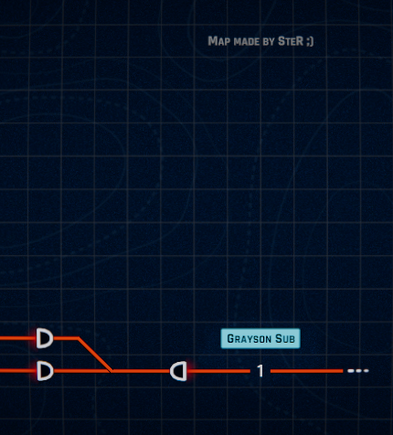 Two station signs. The one at the top is an example of a station sign with no tracks, and the one below is one with tracks.

Station signs help indicate which station tracks belong to which station. You'll need to place the sign above or below the station manually, although you aren't required to do that. The game allows you to put the station sign anywhere on the map, no matter what. This can be used to either make confusing maps, or to make for elegant and creative station designs, depending on the creator and how they decide to use this power.

Station signs can also be used as non-station signs if the station doesn't have any tracks. When a sign has no tracks associated with it, the sign will have no background and will have grey text instead of black text.

Stationless signs can be used in many ways to enhance levels, such as by adding names to geographic locations which aren't stations, including warnings for difficult segments, or just writing memes in your level.

Border tracks are important to any map, as they simulate trains coming onto and off of the stage and interchanging with the outside world. In freeplay, you must make sure that all border stations are marked accordingly, but in scored levels, you only need to make sure the correct tracks are border tracks.

Border tracks have one end as a "border" with the outside world. This is indicated by three small lines in a dotted formation on the appropriate side of the station. Trains will spawn or despawn after riding across these segments of track, and regular track cannot be connected to this end of the station.

If you are using the Map String Converter Tool to help create custom train consists, when a train enters the map, the leftmost car in the consist will always be the front of the train, even if the train is entering from a western border station.

In freeplay, contracts are procedurally generated to go to certain stations. However, some stations might have more traffic of one kind than another, such as a passenger station having tons of intercity contracts but absolutely zero freight contracts.

When editing a station, there are three boxes, each labeled "Freight", "IC", and "Com". Each one corresponds to a train type, of course: Freight for Freight contracts, IC for InterCity, and Com for Commuter contracts.

In these spots, you put the percent chance that a train of the corresponding type should have this station on its timetable. However, be careful - Each train type can only have up to 100%! If you ever exceed a total percentage of 100 in any one category, the game will automatically reduce other station percentages in order to account for it.

Freeplay Automation is currently bugged and does not let the player load saves with station automation. This does not stop you from building and playing a freeplay map, but it does slow things down quite drastically, and can make custom freeplay playthroughs quite tedious. If you're going to make a freeplay map, make sure you're ready to power through this bug!

The Timetable tab allows the player to create and modify one-time contracts. When building for freeplay, this is practically useless, but for scored levels it's insanely important.

To create a new train, hit "new entry". You can rename the train with the textbox in the corner - note that you can only use letters and numbers. No symbols of any kind.

Next to the cursor is a place to put a number between 0 and 59. This is how many minutes the train will stay at the station. If the number is greater than 0 and this is the first station on the train's route, note the train will want to enter the map one minute before its arrival time.

Lastly is the trash can, which deletes the station stop entirely.

There's not many general level settings, but all of them are important. 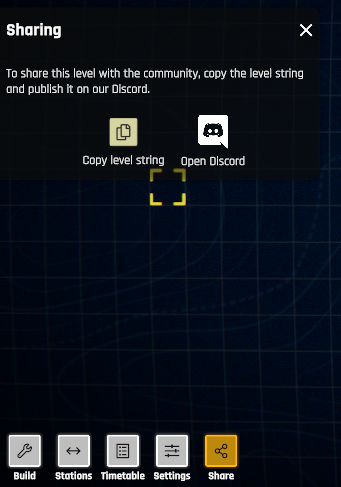 The share tab with the Copy Level String button selected.

Sharing a level is simple. Save the level, then under the "Share" tab, select "Copy level string", then go to wherever you want to share it and paste the code either by right-clicking and selecting "paste" or by using the Ctrl+V shortcut.

When sharing your level, make sure you save it before hitting "copy level string"! The game only copies the latest saved version of the level, so if you haven't saved the level recently, your changes won't be copied.