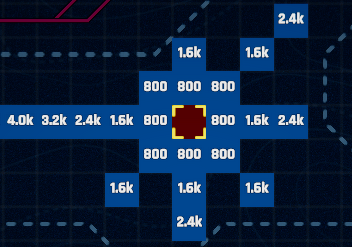 The red square is where the track was first built. The blue squares show where it can be built to, and how much it will cost to build. 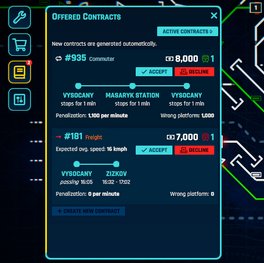 Once you unlock the Coach Yard, Commuter Trains will be split into two "Inbound/Outbound" contracts. You will have to accept the first half to send a train into the map as an "Inbound" contract, then once it's reached its final destination, shunt the train into a coach yard and wait for a new contract to be offered for its "Outbound" return trip off of the map.

This gives the player more freedom over the routes they send new contracts to, and makes longer-distance commuter trains more viable.

The display for Research Points. This player currently has 5 green research and no red research.

In Freeplay, you will get upgrades to your system through the Research tab. This can be the ability to change contract timetables, run faster trains, automate your system, so on and so forth. 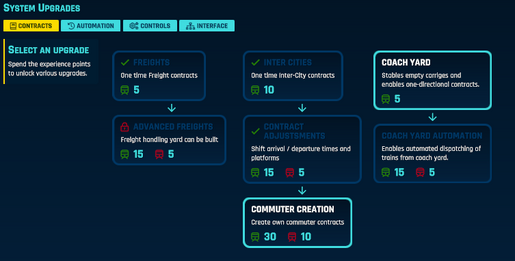 The research tab with some completed research.

When a train completes its route, it will give you a research point unless it was delayed. Wrong platforms do not revoke your research point.

There are two types of research: Green and Red. Green research is awarded to the player when a reoccuring contract finishes its route, while Red is rewarded when a one-time contract (mostly freight contracts) is completed.

In order to unlock a piece of research, you must have everything before it on the research tree unlocked, and also have the correct amount of research points to spend on it. Click on the upgrade and hit "accept" to unlock it.

Hopefully this will be integrated with the steam workshop eventually, but for now, instead you just have to copy and paste a level's code - which is a base64-encoded string of text - in order to add it. You can find level codes in the Discord or in the Curated List.

In the current demo of the game, Custom Levels are locked.