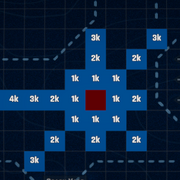 The red square is where the track was first built. The blue squares show where it can be built to. 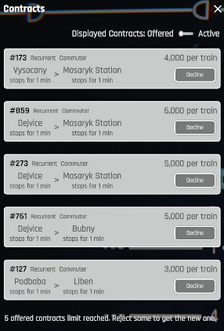 Commuter trains, after a short time playing, will be split into two contracts. You will have to accept the first half to send a train into the map, then once it's reached its final destination, wait for a new contract to be offered for its return trip off of the map. This can take a long time, and is quite risky, so be careful! If the first half of the train takes over an hour to find a contract, your could have some buggy interactions happen.

The research tab, with two completed items in green, one "in-progress" item in yellow, and one unresearched item in white.

If you're playing in Freeplay, you will get upgrades to your system through the Research tab. This can be the ability to change contract timetables, run faster trains, automate your system, so on and so forth.

PLEASE NOTE: At this point in time, Research is getting a major overhaul. Once the game is released on Steam, how you get points will be very different, and will include a system involving one-time contracts.

When a train completes its contract, it will give you a point, unless:

The point will then go into the progress of the current upgrade you've selected.

If you haven't selected an upgrade to progress, the point will do nothing. Make sure to check in on your research progress every now and again! When you've completed a piece of research, the Research tab will flash yellow until you've opened it up, so don't stress too much over it. Just glance over to the lower-left every now and again to see if it's flashing.

Hopefully this will be integrated with the steam workshop eventually, but for now, instead you just have to copy and paste a level's code - which is a seemingly random string of text - in order to add it. You can find level codes in the Discord or in the Curated List.