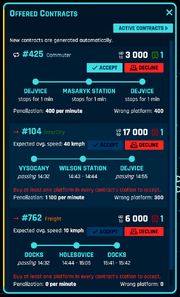 Contracts in Rail Route are an important part of the Endless Mode gameplay. Except for a few in the beginning (in Prague map), the player chooses the most profitable contract that fills gaps in their schedule. They are also the main source of money and experience points.

The list of offered contracts is being constantly filled with “randomly” generated offers over time and you are free to decline those that do not match actual need. The generator is using the configuration from the map, especially the weights which are defined for every station and every train type (defined in the Map Editor). These are the probabilities that the contract for given train type and station will be generated but are actually hidden in the normal game play. The generator also gives a boost to the stations that are already unlocked (at least one platform is bought) or are neighbours to already unlocked stations.

Currently there are two types of contracts - recurrent and one-off.

These contracts are the most common and they form the significant part of the traffic you need to operate. They repeat every hour so the more you are in the game, the more you recognize your traffic from the contracts you have accepted earlier. But everyone will quickly realize that the situation is different every hour.

There are two useful upgrades in the System Upgrades for minor modification. Platform Adjustments and Timetable Adjustments. You can change a platform the train is supposed to be directed and shift its arrival and departure times slightly (±15mins). These unlocks are meant to be more useful in the early stages of the game.

Later in the game you can find yourself in a situation where the contracts are no longer suitable because of the improved layout, upgraded track speeds or the automation needs. You can easily reject the contract. If you do that after the defined amount of trains has been operated it’s even without a penalty fee. But the better option is to run the new trial which is an unlockable feature from the System Upgrades. You can improve the reward from the contract significantly when you progress through your rail network and improve its elements.

These contracts have a timetable predefined and you need to be as precise as possible. They expected the player to achieve at least the average speed which is visible on the contract listening. These contracts are giving better rewards compared to the recurrent ones but can be harder to operate.