In Freeplay, players can utilize the "Build" tab to expand their network by adding new tracks and equipment to their railroad. 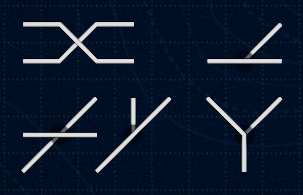 All track intersection types. All but the upper-left crossing can be used as switches, and can be rotated 90 degrees, flipped, or combined at an intersection in any number of ways.

Tracks can be built in a grid-based system. Trains can only turn at 45 degree angles, so players will have to work with diagonals in order to expand. Tracks cannot be built in walls, autoblocks, or stations.

If two tracks connect, they will form a switch. Switches are intersections where a train can change tracks. There are only so many styles of switches you can build, though, so if you ever see that you can't build track off a certain location, it's probably because you can't build that type of switch if there's not a wall, autoblock, or station preventing you instead.

You can upgrade tracks by using the "Change track speed" tool. If you do, it will charge you money equal to how much it would cost to replace the track normally. If you want to upgrade a piece of track to a speed multiple levels faster than it, just click on the track multiple times. You can right-click to remove speed from the track and to get money back.

Signals can be built on any piece of empty straight track. They cannot be built on switches, curves, or other objects. To reverse a signal, just click on it a second time.

Auto Signals can be built on top of Manual Signals. This will only cost you 8,000 instead of the regular 10,000. Manual signals can do the same, and instead give you 8,000.

Signals placed on the ends of tunnels will not function properly.

Sensors will not work if built on the ends of tunnels.

A sideways figure-8 with a tunnel in the middle.

Tunnels are simple: Select the end of one piece of track, and the the end of another, and they'll connect! There's a major catch, though: Tunnels must still apply to the basic logic and rules of other tracks.

On top of that, you cannot build in tunnels, and anything built on tunnel portals do not function properly.

However, tunnels do not collide with anything else. Two tunnels that go straight through each other will not run the risk a crash.

Building in the level editor is quite similar to building in freeplay. There are a few notable differences, however:

There are some editor-specific tools that help users build more refined levels. You can learn more about those on the level editor guide.