The more contracts and traffic you add to your system, the more you need to keep track of and manage. Automation allows the player to let sections of their map run hands-free, reducing their workload.

A player using an auto signal.

The first piece of automation the player unlocks, auto signals save the player a few clicks by automatically routing all switches between it and its destination. These are perfect for more complex junctions where using manual signals is more of a pain than it is a passtime.

When you click on an auto signal, it will show you all the places it can route to in orange. Click on the spot you want the train to end up to, and the signal will route to there. The GIF on the right shows this in action.

You can right-click on an auto signal to remove its route.

Queued routes. Note the number next to the signal once a second route has been added, and the fact that the signal immediately sets itself to the second route once the first train is clear of the switch.

Once unlocked via the research tree, the Automatic Routing Queue allows you to temporarily store routes that the signal will find a path to once the route is clear. If any signal's route - including its own - is in the way, the signal will queue the route and wait.

An auto signal's menu, with the signal routed to one spot indefinitely.

To delete queued routes, find them in the menu in the lower right corner of the screen, then hit the garbage bin icon to the right. The routes queued are listed in order, with the topmost route being the first route to be chosen and the bottom being the last. If you are uncertain which queued route to remove, hover over the track name on the left. The game will highlight what track it is on the map, allowing you to figure out which route to delete.

You can clear all queued routes with the icon at the top of the list of queued routes that looks like a smaller trash can and a piece of paper.

Do you not want to manually let trains in? Auto-accept is here to save the day! When selected, trains will enter the map without your input.

Be careful, though! If a track is occupied either by another train or a signal's route, the train will enter on another station track! This can easily penalize you if you're not careful, and if you're not prepared, a train could get stuck on a track intended for trains leaving the map rather than entering it. Don't let your stations get too clogged, and be cautious with your timetables!

Once unlocked, Auto-Accept is free to add to any number of stations. 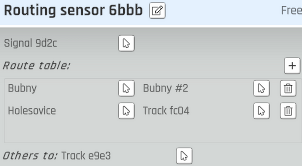 A Routing Sensor, connected to a signal and set up to route to Holesovice and Bubny. Note the "Others To" option at the bottom, which has a track selected.

Sensors detect when a train runs past them and automatically set a route of another signal to a specific track, depending on the train's current destination. If a train's destination is not on the sensor's list of routes, the sensor will not activate, unless a track has been selected in the "others to" setting.

Multiple sensors can be hooked up to one sensor! Each sensor can only pair up with one signal, however.

A routing sensor in action.

Routing Sensors route a train depending on their station. Once a signal has been selected, you can select routes that signal is able to route to. To add a new route, click on the plus sign (+) on the right of the sensor menu, select the destination station by clicking on its name, then select the track for the train to route to by clicking on the corresponding orange line.

If a route is altered in some way, e.g. a switch is added or a signal is put in the way the route, the sensor will not properly route to its destination. To fix this, either delete the route and re-make it from scratch, or click on the rightmost cursor icon on the corresponding route in the sensor menu, then select the new track.

If you alter a junction, check your sensors! Make sure they're routing correctly! Even the most experienced players can struggle with this!

The Platform Sensor will list all tracks it can route to at the bottom of its menu.

How to buy Departure Sensors. Just click on the number corresponding to the platform you want a sensor on.

Departure Sensors are the only sensor that you can't freely build. They must be built on station platforms, and must be bought in the station's menu, as shown on the right.

The most unique part of the sensor is it has the ability to reverse trains. If a departing train's route requires the train to reverse, it will automatically do so when it starts to leave the station.

Trains passing through stations will not trigger departure sensors. Put a routing sensor before the station and hook it up to the signal on the other end.